Week of change (with the ZING)

Changing the look of things that is!
This week (week 8) I played with vinyl again BUT this time it
was heat transfer  vinyl for clothing. It has been such a fun week.
Started with sitting looking at the vinyl for ages trying to work out
how it really works. So then I cut of  a little square and ironed it on to
a piece of scrap fabric  OH WOW it is soo fine .
Then I had to think what will I try first. And I remembered that Neal
had brought a pair of black runners the other day so I cut out two
space invaders and got a block of wood to put inside the shoe to iron to.
And I added to the shoe.
TIP !!!! the eyelets of the shoes get VERY HOT " OUCH!"
I think they turned out soo good 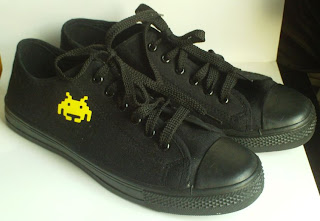 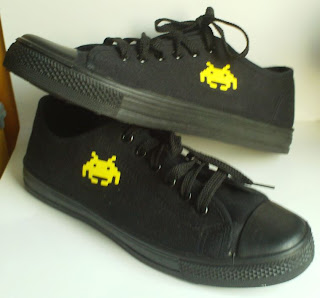 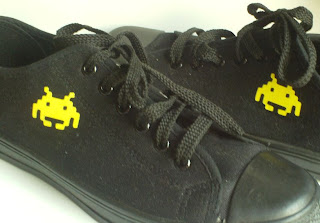 Then I wanted to try a layered picture. This time I wanted to put it on my
bag. I cut all the coloured pieces (at this stage i realized that i was putting
it on a black bag and the black layer would not shoe good so I made a
white shaddow for the whole thing. With them all cut out and pulled away the
waste part of the vinyl i went to the iron starting with the white layer, I
ironed that on the bag and  while still hot pulled of the plastic sticky and
then ironed on the black layer then pulled off the plastic, Continued
layering the pieces one colour at a time remembering to pull the plastic off between
Here is the result 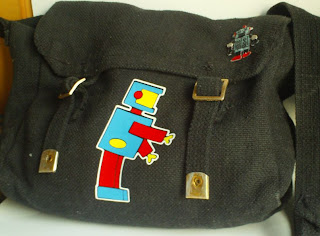 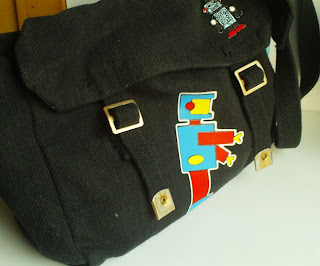 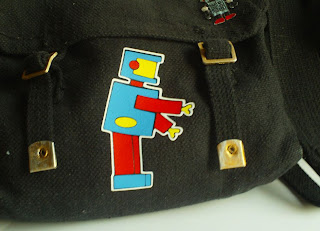 Now that I knew what I was doing and was getting addicted
( did you know I get addicted to things?)
I then cut out the layers for my frog  to put on my tshirt.
Got a little worried that the zigzags on his legs would be too small to
be able to be used . BUT i forgot I was using the ZING wasn't I and
it cut them soo good that they worked great.
Here is the result 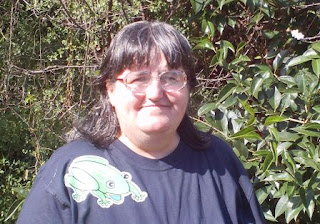 Drew the frog from shirt I made about 15 years ago that i can no longer
buy to fabric to make a new one, BUT I really love the frogs on that fabric 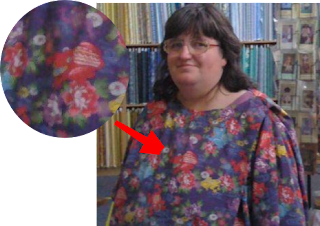 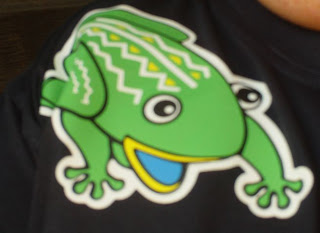 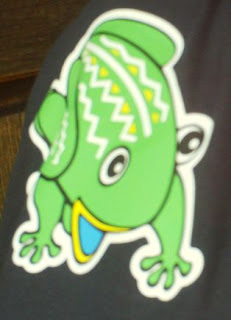 NEXT, those who follow my blog will know that I don't like
wasting things so while cutting out the parts for layering if there
was room to add a little something I would add it. So what I did
was was cut some space invaders out of all the free spaces of the
vinyl and
HERE is what i did with them 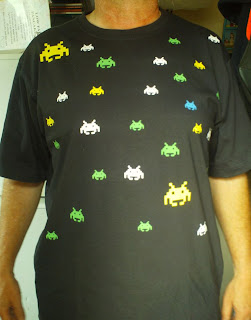 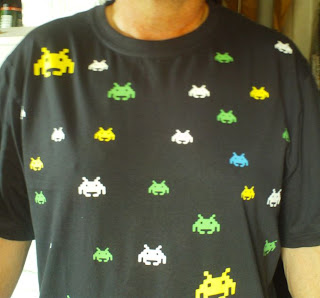 Neal was soo impressed by how they turned out that he then
brought out his blue and white checked shirt and asked could he
he have blue bikes on each of the white squares
(what a good idea ?)
Not knowing how it was going to look and how big the bikes
I would need i cut two sizes of bikes out  30 big ones and 10 little ones.
Once I  went to the iron and started working out how it
was all going to go. I thought that the bigger bikes looked
better so i started ironing them on. But then when it came to
the pocket UGGG  The checked was on an angle, what to do?.....
OH  what about if i tried a little one on the pockets  and it worked
then  putting little ones down the placket at the front
HERE is the result (only did the front of shirt and sleeves) 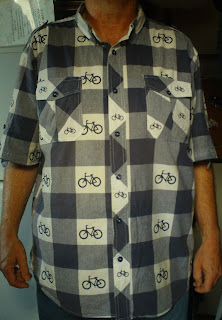 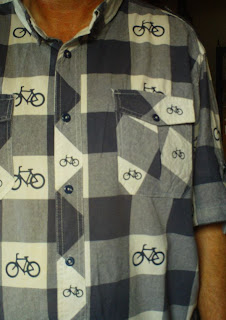 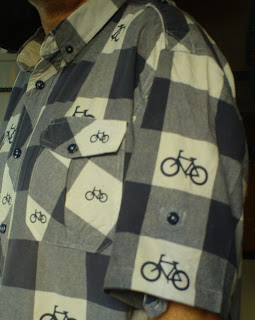 Then Sunday morning (Easter Sunday) being the first cool morning
we have had in some time i has a polar fleece jacket on.
And i kept wondering if it would  be able to have the vinyl on it.
So I cut out a robot and ironed it on .
TIP
if you are putting on polar fleece you need to iron before putting vinyl
on so that you flatten the fleece a bit
AND
that there is no hair on the jacket where you are putting the
vinyl (I did not see it till i was taking a picture of the jacket  UGG
(recon I should have no hair with the amount that falls out daily)
Here is the result 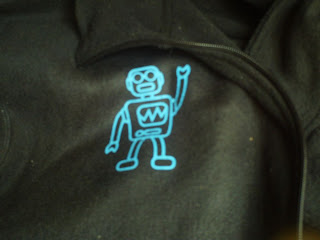 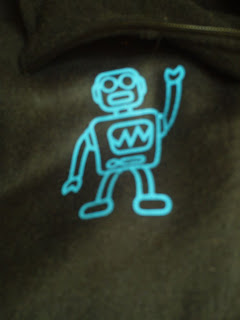 You can buy the heat vinyl from SkatKat


This week I had planed to do fabric stuff but with the
yellow blade but I got a bit sidetracked and in amazement
I found out what an iron does (SMILE)
Still have heaps of vinyl left so be warned that it will not be the last
of me using it  will show you as i make things
I am of to explore some more.
If you live in Australia and New Zealand
and wondering where you can get a KNK Zing
SKAT KAT  is the place to find them
Posted by SusanBluerobot at 4:01 am

Girl, you are on a roll! What fun projects you made and it certainly sounds like you're ENJOYING yourself...good for you! Thanks for sharing.

Great way to use vinyl on clothes. I did not know it existed. :-0

Love your iron-on vinyl work. You've definitely tried a wide range of materials. More than what I have tried!
happy cuttng
Fred

I really love the shirt with all the bikes - it looks amazing!