GEARS and ROBOTS and tips

Last week I ended my post with a center step card
that i made. Well the start of last week I was still
playing with that idea  and I made this card.
I designed this using inkscape. then imported it into
"Make The Cut" to cut on the KNK Zing. Then used a
border punch to punch the gear/robot border and adding
Alota rubber stamps robot stamps (oh designed by me) 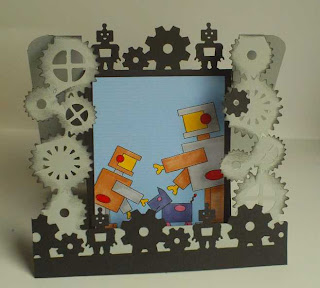 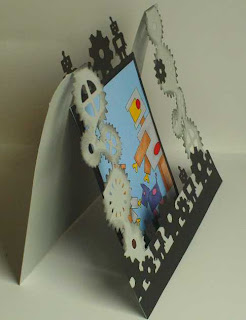 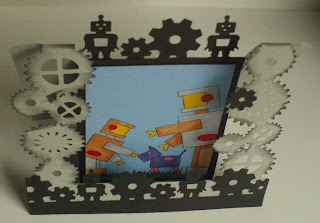 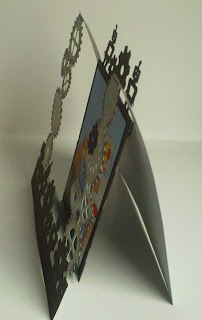 Next I wanted to try the pens in the KNK Zing
so I set out to find the best way to use them.
After seeing a youtube video of the software knkmax
and that  could fill in the area of the font so it engraves
the fonts filled in. Not able to get either MTC or inkscape
to do this easy for me. With the help of the net we found
that the Eggbot machine has a piece of software that
can be put in inkscape so i can then do this for my svgs
(Yes it does slow the make the cut down when you import

the svg after you have made it BUT hey who is in a hurry
when it works this good )
So here is the first svg I did to try it all out
the Bing and Beep are done using inset
and bolts and robots are just out lining
All the rest are using the the eggbot hatch fill ....... 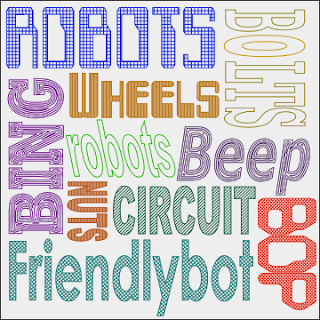 ....... Then I thought i would give it a try and i used a
black metalic pen  and gave it a try (sadly there was not
much ink in the pen!) The output with the pen was soo
cool even with the pen being short on ink  gave it another
look altogether . 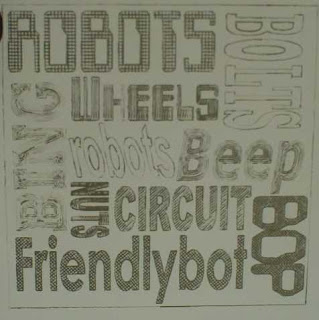 Then I thought people would wonder why would I bother
with printers able to do this sort of thing
But as i don't have a printer that works on black
I gave it a try with the same svg and used a gold metalic
pen (though it was a cheap one and when on black
looked silver) and I was soo impressed with the look of it . 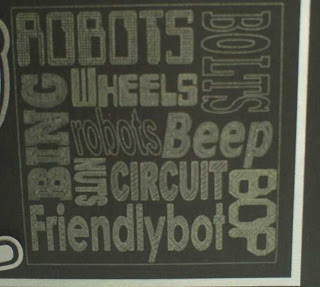 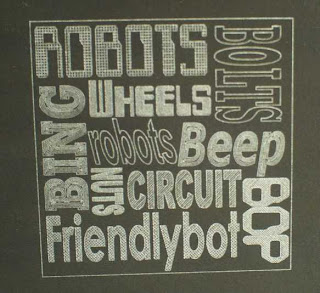 Not wanting these to go to waste i made a robot
cut file and cut some out  Here are the finished cards . I used
action wobbles to put the robots on the card 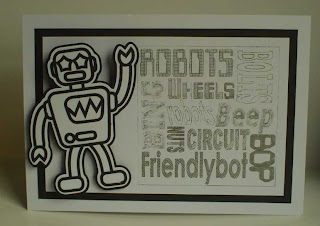 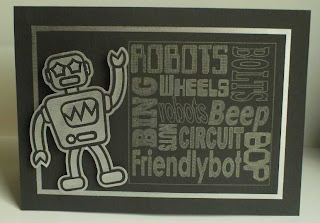 Here are two quick videos of the action wobbles
I was soo happy with the way that turned out I was soo
looking forward to trying the engraving tool  but what to
engrave i dont think i had anything
Then i remembered that someone said the plastic can be engraved
so  I cut some plastic of the blisters i had here and gave it a try
After it was engraved I added some copic ink  (opps too much UGG )
easy fixed ...... 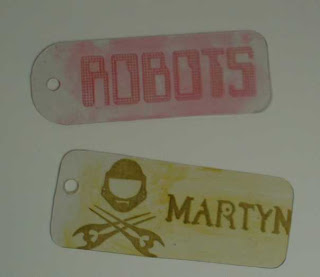 I used colourless to take some away

OH did not judge how much i needed for martyn's one
will be better next time.

Not happy to leave it there  for the week.
I then thought i would give coloured pens ago
Had enough of the word back ground so i thought
oh i will use my robot and eggbot hatched that
and here is the results  (orange needs touch up did not
see till photo was taken) 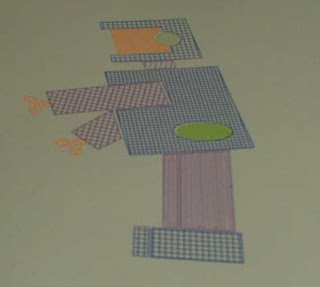 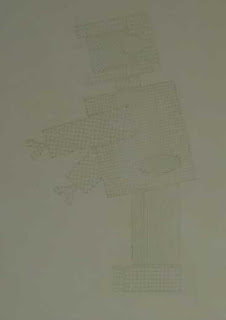 TIP
MOVE WHITE RUBBER BANDS to side when drawing and engraving 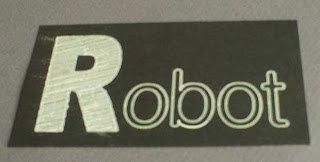 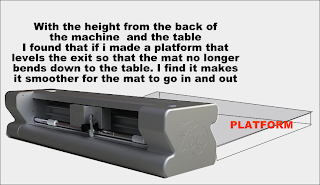 OFFER
If anyone would like me to do a lesson on the
inkscape and eggbot hatch just leave a comment and
i will see what i can do
THREE WEEKS have gone by  and I
am not sure i have found the off button on the
Zing yet.  (question is there one?)
I am loving it soo much learning new
things each day .
I am of to explore some more.

If you live in Australia and New Zealand
and wondering where you can get a KNK Zing
SKAT KAT  is the place to find them
Posted by SusanBluerobot at 11:03 am

Susan, I am laughing so hard that it is hard to type a comment. That post is hilarious (even tho it is informative). I for one would love a tutorial on what you did. Ummmm, all of what you did LOLOL, Millie
P.S. I just scrolled down to submit and see I have to type in some letters to prove I am not a robot,....just saying!!!!

i would love to see a video on this. i have a zing and love it....and i have a eggbot on the way. it's a win win for me

I liked to visit your site when you had a different machine... Now I LOVE to visit!!! You are amazing! I also have a Zing! and I can't wait to see what all you design with it! Your work is truly amaZING!

Yes I'd love to see you do the egghatch on the weekly webinair!!

Also thanks for the tip on the rear platform.