Space Invaders bike helmet
I managed to get some all weather refection tape
in white and yellow and hubby wanted a space invaders
for his helmet. So as i had a fair bit of the white and not much
of the yellow I thought i would try out on the white first
to get the cutting on the zing all set up.
Which only two three tweaks to get it right.

So then knowing that Hubby wanted yellow for
his helmet I loaded it in the machine and pushed cut
UGGGGG BUT what a problem it did not cut it is a
mess.   REASON (with out me realizing) the
white is 0.25mm and the yellow is 0.30mm
the first piece of yellow i had i was able to squeeze
out this one for the helmet upping the force of the cut and
the amount of cuts it does (even though i still had to use
knife in three places) 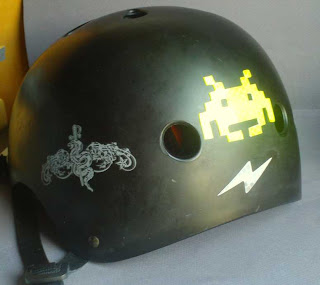 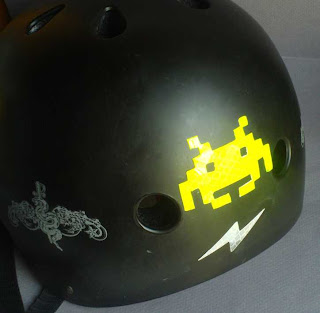 Tip even though you think it is the same stuff
best to check the thickness
Posted by SusanBluerobot at 9:23 am