Here I am to tell of my first week with "Zing".
Opening the box and getting it out.
Pluging in to computer and starting up my make the cut software.
Well then what to choose first to cut.
Of corse it had to be one of the susanbluerobot sliceform
designs. Thinking to myself what sort of test will I give this , so
I cut it small to see how it handled it . Well it cut it with ease
not a problem (cut my teddy sliceform at 2" high (having never
ever cut him that small before) ) I was amazed with how fine
a cut it cut even on the slits they were only on pixel wide when
cutting the teddy this size and not one tear. SADLY with all
the excitement of seeing it cut so nice at 2inches high, I did not
give it a thought of how I was going to put it together (all 37 pieces).
And though the zing cut it perfectly my hands were too fat and it was
impossible to put together UGG (this is not going to beat me I will
visit this at a later date)

Next cut was a butterfly card that I had designed many years ago
and had no luck cutting it on either two machines that i had already.
CUT fantastically The cut on the Zing is soo fine that it looks wonderful.
This I was able to  put together  as a card. Did run the base of the card
though the cuttlebug before putting together. 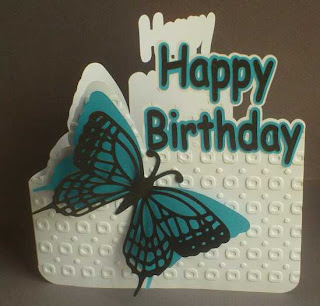 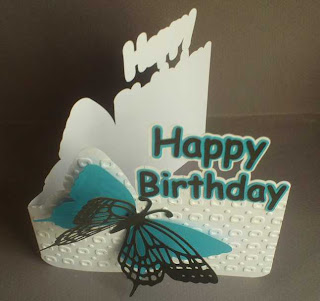 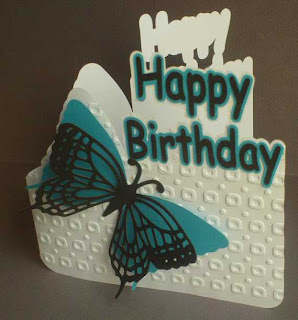 Made the 2 Alota cards challenge  Theme is shaped cards  which
was great  having the Zing that just wanted to cut  them out.
Designed these in inkscape and imported to make the cut. 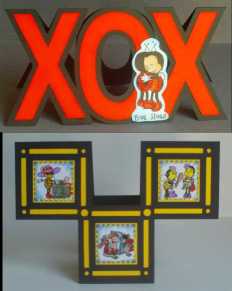 Next  was a big surprise as  before Christmas when making
the snowmen for the snowglobes i made. I tried both my
other cutters doing all tweaking to get them to cut the
Velumn snowmen out with very little success (I ended up cutting out
57 pieces , needed was 10 and  i picked the best of them even though
i had to cut of all the snowmens arms as they were a mess)
So then  Friday was going to be the BIG test when i got out my
velumn  and tested it by slowiing Zing to 9 speed and cut out a
line of butterflies  they ranged between 3/4" and 1 1/4" with
antennas of  butterflies i pixle wide. OMG it cut them perfectly
I mean PERFECTLY i ended up cutting out 200 more  and only had
to throw 2 away but that was not cause of Zing ,
but cause of how i took them of the mat .
Here is a book I made using some of them  ,
OH also cut the lettering  out . 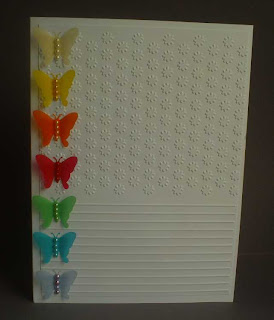 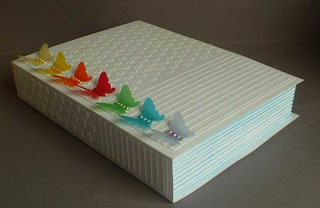 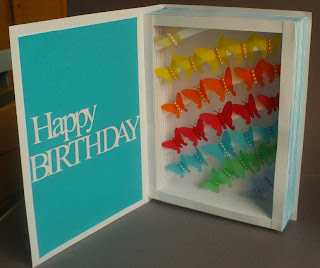 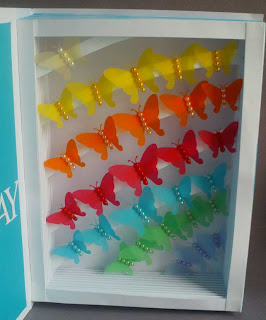 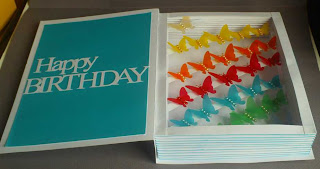 I am of to explore some more.
If you live in Australia and New Zealand
and wondering where you can get a KNK Zing
SKAT KAT  is the place to find them
Posted by SusanBluerobot at 3:37 am

FANTASTIC!!!! cannot wait to get one of these machines!

Hi Susan, Greetings from here in the U.S.
I got my ZING for Christmas from my family and I love it. The print and cut feature is just awesome. I so glad you got one. I haven't visited your blog in awhile but I have in the past. I learned a lot from your posts So glad to stop back in and say Hi. I love your purple teddy too. Enjoy the ZING, I know you will make some fantastic things.
Lysa in New Jersey, USA
P.S. - Please stop by and visit me too at
www.lysaandhueyink.blogspot.com
I would love a visit from someone so far away!

Wow Susan...I haven't been to your blog in a LOOOONGGGG time, but just popped in and see that you are still up to amazing and inspiring work! I'm considering a zing so I'm gladdly going to follow along and see how it does for you! Thanks for sharing!

I'm in love with those book cards!

That book of butterflies is beautiful. Just got my zing today and love it so far. Your review here gives me great hope!

wonderful cards, Susan! Zing is a truly amazing machine. amazing support on the forum and lists. I got mine back in nov. and am in heaven everyday using it. pnc is awsome. I took it to a crop and ladies wanted to know what my machine was. of course I told them!have lots of fun. love that butterfly card!!
http://mainelytwigs.blogspot.com

I just got one of these for my birthday and I can't wait to be able to do these wonderful things. Very inspirational, Thank You!!